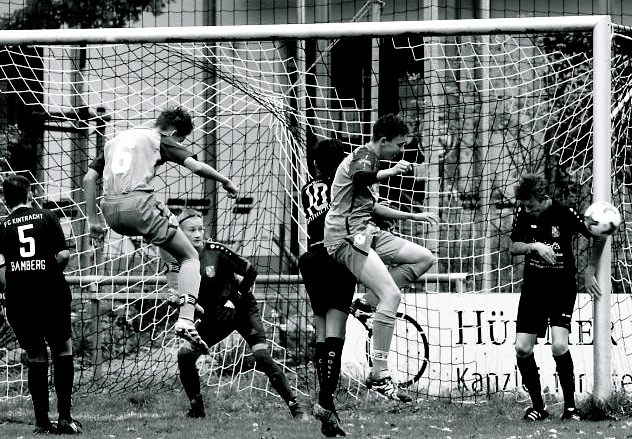 »Giving up is not an option

~ Hannah C. Johann,
Personal Narrative „Giving up is not an option“

Suddenly I was not able to breathe anymore.
I could not perceive my right arm. Everything just hurt. “I cannot leave the pitch,” I told myself over and over again. (…) I had already had some bad injuries, but this one in 2017 was the worst.

The doctor told me that I am not going to be able to play for the next two months. This diagnosis was supposed to define me. It did, but not in the way the medical experts meant.

As a girl competing against one year older boys was not always easy, contrarwise there were sometimes conflicts, when people still had the opinion, that soccer was not a girls sport. I never really listened to those kind of people, instead I tried my best to persuade them with my performance.

The first week I was not able to practice at all because my arm was just hurting too much.
I came back as a field player the next week. I started to learn, that sometimes even huge disappointment can help me develop. In this case my injury allowed me to improve my skills with the ball on my feet, which is also important to have as a goalkeeper, the position I usually played. I improved my shots, goal kicks and passing a lot, and I even started playing as a field player in scrimmages.
My male teammates, who had sometimes doubt my performance before, helped me a lot going through this time and I was able to see who granted my execution, and who was unbiased jealous of what I had accomplished.

Of course I was saddened because all my hard work before, which had just paid off, was destroyed within one second. Still I soon started goalkeeper practice with my left hand while my right hand was stuck in a cast. (…) My goal was to definitely keep up my hard work and try to stay on track.
Even though I was very disappointed sometimes because I just wanted to be able to play games again, I never stopped working hard and so I was back on the pitch two months later, better than I ever was before. This time showed me, that it is always good to try to see the bad situation’s best possible outcome.

Three months later I could look back to this time and and was able to say myself, that a doctor’s diagnosis is never going to define me. (…) It only matters how intense you keep working and if you will try to make the best out of every situation, it will give you the right mindset.
The mindset this injury gave me is, that giving up is not an option.«